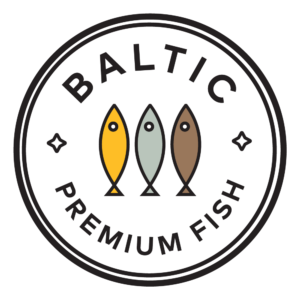 Origin of the Fish

The Baltic Sea is one of the largest inland seas in the world, with a total surface area of 373,000 square kilometres, an average depth of 52 metres and a salinity level of just 8-10%.

Almost 100 different species of fish are found in the Baltic Sea, some of them originating from rivers and lakes but able to survive in the sea because of its low levels of salt. Sprats, Baltic herring, flounder and cod are the four fish most commonly caught in the Baltic Sea.

Most of the sprats and Baltic herring caught by Estonia are frozen for export, the majority (more than 90%) to Ukraine.

The Baltic sprat is a subspecies of the European sprat, which is a member of the herring family. On average, sprats live for 2-4 years and grow to a length of 7.5-15 cm. Sprats are at their fattiest in autumn and winter and at their least fatty during the spawning season from April-July. Sprats can be found in almost every part of the Baltic Sea, including its largest bays, although in certain areas their numbers are rather low.

This subspecies of the Atlantic herring belongs to the wider herring family.

It is found in the Baltic Sea to the east of the Danish straits.  Baltic herring are small, mostly only growing to a length of 14-18 cm and weighing 30-90 grams. They live for 6-7 years. Giant Baltic herring are also to be found, rapidly growing to lengths of 33-37.5 cm. Schools tend to be made up of fish of the same size. Smaller (which is to say younger) fish congregate in shoals in shallower water, while the older and larger contingent keeps to deeper water. As autumn storms cause warmer and cooler layers of water to intermingle, Baltic herring of all ages dive ever deeper, eventually to overwinter close to the sea bed. The spawning season produces two cohorts: spring Baltic herring spawned from March to June; and autumn Baltic herring spawned in August and September.

Did you know…? At sunset, Baltic herring rise up to the surface layers of the water for the night, before descending again to deeper waters come sunrise.

Trawling accounts for most of the catch of sprats and Baltic herring.

The oldest trawler in the fleet was built in 1961, while the newest dates from 2010. In addition to trawling, Baltic herring are also caught by coastal fishermen, who use trap nets to do so. The average age of the vessels used by such fishermen is 24. The oldest has been in use since 1950; the newest since 2021.

As the age of the fleet indicates, sprats and Baltic herring have been fished in this way for many years, with the method developing over time (updated trawl and trap nets, fleet and technology) while retaining its traditions. Crews have passed their knowledge and skills down from generation to generation, with some crews seeing members of different generations of the same family working together.

In order to fish professionally today it is not enough to have a vessel: to catch a significant amount of sprats and Baltic herring, coastal fishermen and business operators must have historical fishing rights, on the basis of which fishing permits are distributed. Permits for both individual fishermen and fishing vessels are issued in Estonia by the Agriculture and Food Board.

The entire catch is traceable from the moment it is caught to the moment it is sold. This is regulated by a range of laws and European Union regulations. The aim in doing so is to preserve the quality and freshness of the fish all the way through to the final product, so that they are safe to eat and taste good when they land on people’s tables.

What happens to the fish after they are caught?

The sprats and Baltic herring caught by the fishing fleet in Estonia are used by local companies to make the following products:

Sprats and Baltic herring are caught in different parts of the Baltic Sea by companies using their own vessels.

Ports and production facilities are well located, ensuring that the fish reach the processing stage quickly and thus preserving their quality. The entire catch can be monitored up to the point at which it is sold. All of the fish caught correspond to European Union norms and all fishing companies support sustainable fishing.

Products are sold to larger production companies, which use them to make high-quality products of their own (various types and flavours of tinned fish, as well as smoked and dried fish), or to wholesalers, who then sell them on to producers themselves.